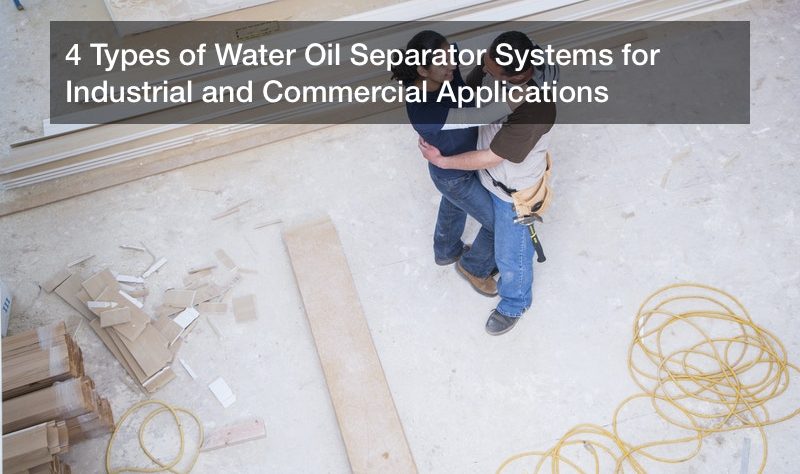 The Earth comprises of many natural resources essential for human survival. Water, in particular, is one key resource that is used for different purposes — human and animal consumption. However, the industrial wastewater entering a water body and effluent being released into the environment account for significant environmental pollution around the world.

That’s why there’s an increased need for efficient ways of treating and decontaminating wastewater to make it safe for human consumption and other industrial uses. One of the industrial water treatment systems solutions that have proved efficient is the use of a water oil separator system.

As the name suggests, these water treatment systems are used to treat wastewater by removing oil and other contaminants and pollutants from water. Industries cannot discharge effluent in water bodies before the pollutants are removed or reduced less-harmful levels.

The following are some of the common types of water oil separator systems used for commercial or industrial applications.

This is a traditional oil and water separator system that relies on the force of gravity and the density concept to remove pollutants from water. The efficiency of gravity water-oil separator is, however, determined by several factors such as particle size, the gravity of oil, temperature, and viscosity.

Ideally, the process involves passing wastewater through a separator where less dense hydrocarbons float on the top surface, sediments and other heavy particles collects at the bottom. Leaving water settling in the middle.

The oil is collected and disposed of and water is allowed to release into the environment. Then the sludge from the sediments is scraped off the bottom and dispose of, and the separator is cleaned. Conventional separators are designed with layers of cone-shaped oleophilic that facilitate the separation process.

Designed with a conical-shaped chamber, this water equipment depends on centrifugal force to remove free oil and suspended solids within the wastewater.

The system generates an active vortex when wastewater is injected at high pressure into the tank to create a centrifugal force, which then causes a cyclone movement. This movement is responsible for displacing water to the outer edges of the tank, allowing the less dense hydrocarbons to collect in an oil tank.

This is an efficient solids removal system and widely used in highly polluted water such as industrial wastewater and it also requires less maintenance.

Designed to separate three kinds of contaminants — suspended solids, oil and greases, and biochemical oxygen demand, DAF is an efficient process that dissolves air in sewage and wastewater to speed up the oil flotation process.

Ideally, the dissolved air attracts oil and helps to carry it to the top where it’s skimmed off. Like in some water oil separator systems, the sediment that collects at the bottom as sludge is removed and disposed of.

This type of water treatment system is made with oleophilic corrugated plates placed parallel to one another within a tank. The typical distance between these plates is about 6 – 12 millimeters. Wastewater passes through the tank and in between the parallel placed plates, where it’s oil and other hydrocarbons attach itself.

After repeated times, the oil collects on the plate to form large droplets that eventually come to the top surface and drained into an oil tank. The clean wastewater is discharged into a clean water outlet — where it can be released into the environment or recycled for use.

The type of water oil separator system to use will depend on it’s a specific application. Each of the mentioned above systems separates oil and suspended solids using a different mechanism. So you need to determine what sort of machine you need to pick what’s right for your applications. Of course, cost and maintenance will also vary.